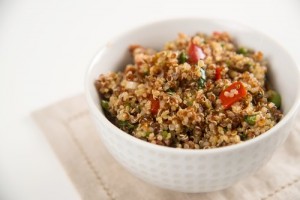 Data compiled by the Food and Agriculture Organization (FAO) of the United Nations ranked the U.S. second only to Luxembourg as the world’s meat consumption leaders per capita. But all meat is not created equal. One in three American adults is considered obese, according to a 2014 study published in the Journal of the American Medical Association. Only one in five Luxembourgers is carrying extra weight.

Meat is the primary source of protein for most Americans. It is an essential building block of hair, nails, skin bones and muscles. Its also vital in the production of hormones and is a necessary catalyst for many biochemical reactions like digestion and metabolism. Meat eaters can stay fit and healthy by varying their sources of protein while simultaneously expanding their food horizons.

Chicken, beef and pork are the the most common meats consumed in the U.S. Rabbits used to be considered a patriotic food during World War II because they are easy to farm and harvest. There were also several large commercial rabbit processing operations in the U.S. prior to the 1930s. But as beef and pork became mainstream, rabbit meat faded into relative obscurity and Americans started viewing them as pets rather than food. That’s too bad for a number of reasons.

One three ounce serving of rabbit meat contains only 173 calories versus 295 in the same amount of beef, according to the USDA . This “other white meat” is lower in cholesterol, has less overall calories per pound and contains a higher levels of digestible protein than chicken. It also tastes great fried, broiled and in stews.

The caveat with rabbit is that its not as readily available as other meats. A great way to get rabbit meat is hunting. It provides both a new hobby and increased physical activity in your life. A good compound bow can be had for under $300 and are far easier to aim and shoot than traditional recurve bows. Farming rabbits is the way to go, though. They eat almost any green plant and can have up to 14 babies per litter. Rabbits take up very little space, and can be farmed in an area as small as a bedroom.

The FAO named 2013 “the international year of quinoa” due to its high concentration of antioxidants and anti-inflammatory phytonutrients. Quinoa also contains isoleucine and lysine, two amino acids that most grains completely lack within their protein chains.

The main issue with quinoa is that most Americans have never heard of it. Quinoa is cultivated mostly in South America and Spain, and is known for its edible seeds. White and black quinoa look like little beans when raw. You can now buy it anywhere from big chain retailers like Walmart to health food stores like Whole Foods.

There are several ways you can enjoy the eight grams of protein per cup quinoa provides. You can cook it all by itself like rice for a side dish. Its also great in chili and salads.

The Han Dynasty of China is typically given credit for being the first to produce and consume tofu 2,000 years ago. The soybean curd product did not become popular in America until the 1940s when Japanese Americans introduced it to the rest of the population.

One half-cup serving of tofu contains seven grams of protein and is rich in Vitamin K, B6 and niacin. It comes in two main categories: silken and soft. Some people eat it right out of the box without any further preparation aside from draining excess water.

Tofu acts much like a sponge, so it absorbs flavors easily. You can grill a block of it after marinating in beef broth to produce a high protein, lower-calorie steak alternative. Its also good in stir fries. Men, however, should limit their tofu consumption as a high soy diet has been found to lower testosterone levels in several studies.

Meat is not essential for human well-being, but protein is. The vast amount of protein-rich foods allow you to have your steak and eat it too.